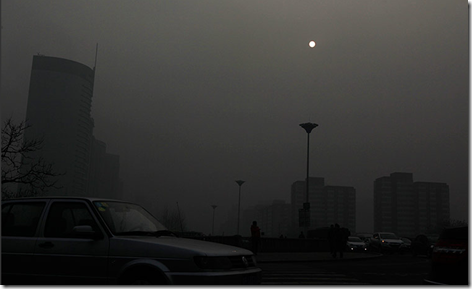 I mean, don’t they have a climate control weapon or “something” which they proudly showcased during the Beijing Olympics?  How come they don’t use it NOW?

They should use it to wash the hazardous PM2.5 down while they are still in Chinese territory.

Zhao Jialin, a blogger on Sina Weibo, a Twitter-like microblog site, tweeted: "Thank the government for making this effort to solve the problem. It is a Chinese New Year gift from them to the people."

As I mentioned before, China should seriously consider to slow down their current pace of motorization, put extremely high tax on all vehicles using fossil energy and encourage their people to switch all vehicles to EV or Hybrids, and better yet, go back to bicycles like they used to!