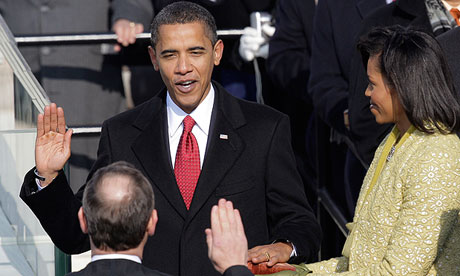 President Barack Obama is putting a symbolic twist on a time-honored tradition, taking the oath of office for his second term with his hand placed not on a single Bible but on two – one owned by Martin Luther King Jr and one by Abraham Lincoln.

The use of King's Bible is particularly significant since the inauguration is on 21 January, the federal holiday in honour of the civil rights leader, who delivered his "I Have a Dream" speech 50 years ago at the Lincoln memorial. Obama will be facing the memorial as he takes the oath. King's Bible, which his children say he used early in his career as a preacher, has never been part of a presidential inauguration.

There were some great words and phrases in his speech, some of which were historically remarkable actually, and that go in line with “I have a dream” speech by civil rights hero Martin Luther King Jr.

But putting his words into action would be very tough job for him during next four years term.

And I sincerely hope that he will not be crucified by his own words.