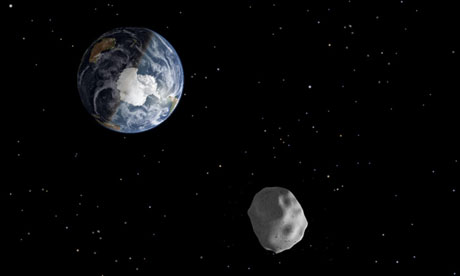 On Friday evening asteroid 2012 DA14 skims closer to our planet than any other known asteroid. Although invisible to the naked eye, binoculars can bring the space rock into focus. Or simply watch the webcast.

Space rock 2012 DA14 is only 50 metres across. It will pass the Earth on Friday evening (UK time) just 17,100 miles above our heads. There is no danger of a collision. Nevertheless, this is closer to the Earth than many artificial satellites.

It will pass from the southern to northern hemisphere and set the record for the closest pass of any known asteroid since systematic surveys of the sky began in the mid-1990s.

Animated visibility map for asteroid 2012 DA14 between 18:00 and 21:30 GMT. The asteroid will be visible from green areas. Image: Geert Barentsen

According to Don Yeomans of Nasa's Near-Earth Object Observation Programme, an asteroid like 2012 DA14 flies this close on average only once every 40 years.